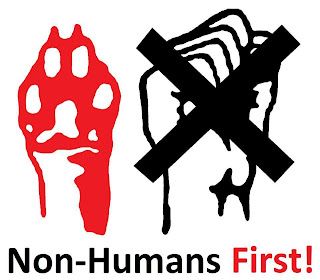 The Logic of Non-Humans First!

As intersectionality discourse has gained resonance in Nonhuman Animal rights spaces, the challenge to the previously invisibilized white- and male-centrism has inspired organized resistance. Perhaps the most visible of these countermovement efforts is the  Non-Humans First Declaration. Explicitly dismissing the importance of race, class, and gender, the declaration insists that the advancement of Nonhuman Animals should be prioritized at any cost.

The declaration was authored by a collective known as Non-Humans First!, a project of the Israeli direct action group 269life. In the 2010s, 269life rose to prominence in the Nonhuman Animal rights movement with the deployment of numerous morally shocking reenactments of violence against humans intended to allegorize nonhuman oppression.

One such public demonstration featured a woman and a child as representatives of victims of dairy production. Male activists ripped the woman’s child away, placed it on the ground, and proceeded to sexually assault the screaming woman, beating her so aggressively that she bled. The event ended with men dragging her by the neck into an unmarked van, symbolizing the eventual slaughter of dairy cows.

In another street demonstration, unclothed white activists mimicked the buying and selling of Africans by appearing in chains and branding one other with hot irons to draw connections between human and nonhuman chattel slavery.

As these examples demonstrate, the aim is to trigger the traumatic memories and realities of marginalized communities. Their discomfort is believed to inspire solidarity, encouraging audiences to recognize nonhuman oppression and become vegan.

Thus, 269life’s anti-intersectionality manifesto should be interpreted within a repertoire of violent direct action. The intention may be to highlight intersections of oppression, but, ultimately, these tactics do not respect intersectional politics as they are a product of appropriation Regardless of intention, they aggravate human inequality to make their point.

However, causing harm to vulnerable humans is not considered especially relevant. The Non-Humans First! approach demonstrates that harm to humans is ill-considered or outright provoked by its activists. For that matter, anti-speciesists who choose the latter option of provocation and ascribe to bigoted views are welcomed to participate as comrades. As the manifesto states:

No one should be excluded from participation in animal rights activities based on their views on human issues. The non-human animals are in a situation of immediate emergency and need all the help they can get!

While it is true that the Nonhuman Animal rights movement has lagged behind similar social justice efforts, the frustration with slow-coming change and the desire to cling to any and all available resources should not cloud strategy and common decency. Nonhumans do not need all the help they can get if that “help” encumbers movement progress by aggravating social inequality and alienating potential allies.

Furthermore, the women’s rights, anti-racism, etc. movements have no requirement that participants reject species oppression and nor should the animal movement demand the adherence to human rights positions while animals are still in a state of emergency. Of course, every rule has its exceptions (as decided by individual groups) but these kind of bans and exclusions should not be the norm in animal rights.

Here, Non-Humans First! posits that, because there is no requirement for human rights groups to include speciesism, the Nonhuman Animal rights movement should not worry itself with respecting other humans. This is a hypermasculinized logic of “everyone out for themselves,” one that is explicitly adversarial and renders alliance-building unfeasible.

Furthermore, it is grounded in fallacy. It is inaccurate to suggest that Nonhuman Animals are in a state of emergency, but that human animals are not. Victims of war, genocide, rape, starvation, disease, slavery, etc. are most certainly in a state of emergency as well. Non-Humans First! activists wrongly presume that those who would be harmed by their offensive protests are on more or less an equal social footing, but the 21st century remains deeply unequal. Most of the world’s humanity can only dream of the privilege that is enjoyed by the average anti-speciesist activist.

The Privilege to Frame Suffering and Need

Indeed, it is the relative privilege afford to many Non-Humans First! activists that most likely accounts for their anti-feminist position. The suffering of the underprivileged (children, women, people of color, non-Westerners, etc.) is easily disqualified by those who do not have direct experience with it. However, the patriarchal norms of the white-centric Nonhuman Animal rights movement allow that such rhetoric is likely to resonate with other activists. Non-humans First! posturing draws on white male Western epistemology that structures anti-speciesist collective action, but it has little impact outside of movement circles where such ideas are understood to be threatening and otherizing.

The Entanglement of Oppression

Another reason why this approach lacks effectiveness is due to the nature of oppression. Inequalities cannot be cherry-picked. Working to end the oppression of some while abetting or aggravating the oppression of others only serves the cultural belief that oppression is acceptable.

For that matter, oppressions function in tandem and are frequently entangled. Non-humans First! will find it difficult to prioritize nonhumans without inadvertently impacting human causes. When 269 Life sexually assaults and beats women in demonstrations because “no tactical idea should be excluded from the discussion based on its conflict with human rights ideology,” it employs powerful ideologies of misogyny to shock or even threaten its audience into compliance. The repercussions are not theoretical, but have physical consequences for girls, women, and others who are vulnerable to sexual violence. Rape culture remains as pervasive as ever, and violence against women is normalized, trivialized, and even encouraged. It should be the business of anti-speciesists to denounce violence, not participate in it.

The Non-Humans First! campaign shirks responsibility in this regard by insisting that vulnerable humans are not deserving of any rights themselves until speciesism is attended to:

We are aware and concerned about the fact that some human rights improvements within a fundamentally oppressive system towards non-humans leads to increased oppression of non-human animals. For example, economic improvements leading to increases in factory farming, meat consumption, animal labs, etc. We therefore call on human beings to free their own (non-human) slaves before demanding their own rights.

But this is simply not how oppression works. 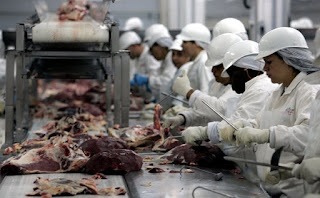 By way of an example, slaughterhouse employees are often undocumented, and have few rights whatsoever. They experience the one of the highest rates of job injury and death in all U.S. industry, while female employees face regular sexual harassment, assault and rape. Slaughterhouse workers are routinely denied benefits and job security. As a consequence, many are living in poverty and disability, struggling to stay alive and to support their families.  How is it that these persons are in a position to “free their own slaves” if they are structurally prevented from attaining even their own rights? Slaughterhouse work is so dangerous and unrewarding, workers must be assumed to be living in serious precariousness. Why else would someone enter such an occupation? In such instances, there is little choice for workers wishing for employment that aligns with their values.

When anti-intersectionalists frame human participation in immoral industries as a matter of “choice,” they obscure the fact that this is a “choice” that privileged persons rarely (if ever) have to seriously consider. Choice rhetoric works to obscure social inequality. It incorrectly blames individuals targeted by exploitative systems for the consequences of exploitative systems.

Choice rhetoric also makes little sense when considering systemic human oppressions that target minors and dependents. Child slavery and sex trafficking continues at staggering rates across the world, for example, and children are certainly not in a position to prioritize speciesism over their own welfare. Choice requires power, and only an elite few are privileged with this agency. Even if children and other vulnerables are unable to renounce speciesism, they should not be abandoned. Nor should tactics be designed that inflame the problematic ideologies and institutions that target them.

The Sociology of Bridge-Building and Burning

Understandably, intersectionality is a difficult concept for many activists to accept given the tremendous violence facing other animals, but the unfortunate reality is that not everyone has the “privilege” to fight specifically for Nonhuman Animals.  Many humans must focus on their own health and safety simply to survive. By villainizing vulnerable humans, Non-Humans First! creates an atmosphere of discomfort and hostility which suggests that underprivileged persons are simply part of the problem if they object to questionable tactics and are not entitled to be anti-speciesists themselves if they cannot prioritize other animals.

Although it seeks to achieve the opposite, the Non-Humans First! campaign thus nurtures division between representatives of the Nonhuman Animal rights movement (who are predominantly male and almost exclusively white, middle-class persons) and disadvantaged groups living with rape, violence, murder, enslavement, poverty, hunger, disease, and other deprivations. Solidarity, not shaming, is what is needed.

Social movement theory warns that marginalizing the large demographic of disadvantaged humans and focusing only on the interests and worldviews of the tiny fraction of elite movement leaders is ineffective. This approach will not build a strong, credible, respected, or powerful movement. Animal rights will remain marginal because it will appear out of touch with the reality of social inequality. Scientific research supports that effective social justice strategies rely on a reasoned, evidence-based, logical, non-violent framework, one that is congruent with movement goals and not antithetical to them.

An earlier version of this essay first appeared on the Academic Activist Vegan on September 8, 2013.

Readers can learn more about the intersectional politics of Nonhuman Animal rights movement in my 2016 publication, A Rational Approach to Animal Rights. Receive research updates straight to your inbox by subscribing to my newsletter.

This time yesterday I was groovin to the sweet nos

How I spent my solstice 🌾🌼🌤

All about these completely last minute free ticket

My office for the day

This bird's literal shit on my writing is still no